Accurate representations of adolescent or adult grief in the media and pop culture are few and far between so when a movie or television series comes along that attempts to portray both, grief specialists like me pay attention.

The arrival of NBC’s hit TV series, This is Us, was one such occasion.  For much of the entire first season, the fact that Jack, (the patriarch of the family), had died was part of the story line, but the cause of his death was not revealed.  There were only a few, veiled glimpses of the teen aged family members grief reaction at the time of the death, and again as adults in the ensuing years during the first season.  Ardent fans were left wondering “What happened to Jack?” at the close of Season 1.

Thankfully this changed in Season 2 when the traumatic event that caused Jack’s death was finally revealed in all its heart wrenching detail.  Not only did we see the cause of the house fire (a faulty crockpot), but we witnessed the acts of heroism by Jack that resulted in his entire family, including the dog, being spared.  You didn’t have to be a grief specialist to know that Jack’s decision to go back into the burning flames to rescue young Kate’s dog was going to cause a world of emotional pain for Kate for years to come.

The actor playing Jack’s wife, Rebecca, did an admirable job of reacting to the news of her husband’s unexpected death while she had a brief respite at a vending machine in the hospital.  Grief alert! —Rebecca would experience a “‘would’ve, could’ve, should’ve” moment, so common to grievers, leaving her wracked with guilt. 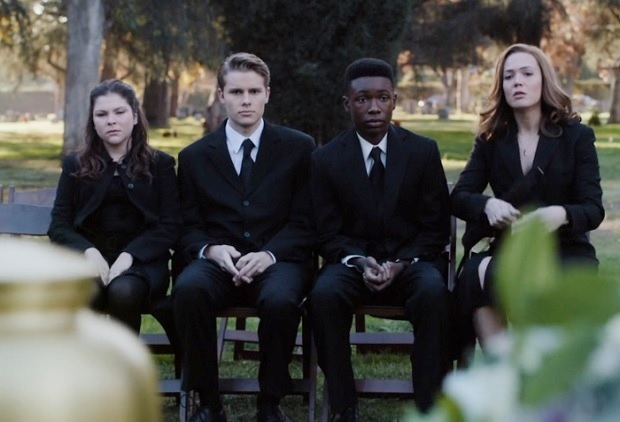 One of the most important teachings grief specialists want others to know is that grief doesn’t conform to any uniform stage model but is instead unique for each human being. This is Us shows us how differently each of Jack’s three adolescent children grieve his sudden, traumatic death.

Grief specialists are also grateful that This is Us highlights the benefits of maintaining on-going mourning rituals and continuing bonds with the deceased.  Although twenty years have passed since Jack died, Rebecca still bakes her lasagna for Super Bowl Sunday dinner, even if she must some years eat it alone, since that was their tradition.  Kate has her father’s ashes in an urn on her mantel and watches football with “him” on Sundays.  Additionally, Kate hasn’t wanted a dog since her father’s death, but does ultimately get one ostensibly for her fiancé Toby which is a big step forward in her own healing process.  Kevin visits his father’s favorite tree, which we learn is where some of his ashes were scattered.  He talks to his father and has on-going work to do in his recovery and therapy before he can be truly available for a loving relationship.

But what we, grief specialists are most grateful for is the honest, raw, heart-felt and yes, entertaining portrayal of a grieving family that helps grievers in the viewing audience feel a little less isolated.  Perhaps these viewers can see themselves in one of the teen or adult siblings, or in one of their partners or in Rebecca and know that what they are experiencing isn’t crazy or wrong.  Maybe This is Us will ultimately help the grievers in the audience feel a little more hopeful at the end of the season and that they will too find a way to survive their unspeakable losses.

Written By:
Lauren Schneider, Clinical Director of Child and Adolescent Programs
A nationally recognized authority on children’s grief and author of “Children Grieve Too: A Handbook for Parents of Grieving Children” and “My Memory Book…for grieving children.” Lauren is also the Associate Producer of “One Last Hug…and a few smooches,” an Emmy award winning HBO documentary about Children’s Grief.

Lessons About Life and Death Learned from Glee